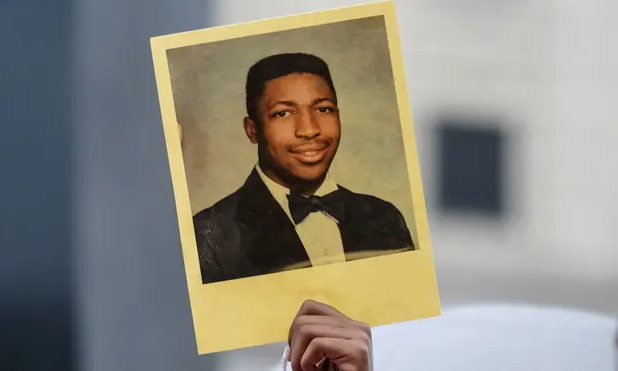 I can’t breathe. Eleven times Eric Garner said those famous words through a compressed windpipe while police officers held him in a prohibited chokehold that ultimately ended his life.

It was July 17, 2014 in Staten Island that officer Daniel Pantaleo attempted to arrest Mr. Garner for suspicion of selling single cigarettes. Mr. Garner did not know why he was being detained, as the police were on scene for another reason. It was a fight, actually, that Garner had helped to break up.

According to police, when the attempt was made to arrest Garner, he did not comply and pulled his arms away from officers. That’s when Pantaleo wrapped his arm around Mr. Garner’s neck and wrestled him to the ground where other officers helped to keep him pinned.

11 times Eric Garner repeated, “I can’t breathe.” 11 times this desperate plea for his most basic right, air, went ignored by those sworn to serve and protect. Mr. Garner soon lost consciousness and died shortly after.

Eric Garner’s death was ruled a homicide due to neck compression. And, after 5 long years, officer Pantaleo was finally fired while the Garner family was awarded 5.9 million dollars from the city of New York. A Grand Jury declined to indict officer Pantaleo for the use of an illegal chokehold resulting in Mr. Garner’s death, leading to massive protests across the country.

It gets even worse. Ramsey Orta, a New York resident and opponent of police brutality who captured the event on video, became victim of a mass poisoning while incarcerated at Riker’s Island in what looks to be a retaliatory act of solidarity with officer Pantaleo and other members of New York law enforcement. Orta went on a well-publicized hunger strike after falling ill several times after eating prison food that was later found to be tainted with rat poison. The following lawsuit awarded inmates of Riker’s Island 378 thousand dollars in damages.

So, what can we gather from all this and how do we stop it? If personal ethics and public outrage don’t prevent evils such as these, maybe continuing to hit them in the money, where it counts, is what we need to do. In addition to the 5.9 million their brutality has cost the taxpayers, their retaliation against those who witnessed Mr. Garner’s murder and stood up for him has cost them an extra 378 thousand. Their brutality, illegal detentions, and inhumane treatment of whistle blowers who are 100% in the right has cost New York more than 6 million dollars. What good could have come from that 6 million?

Despite the absence of indictment of Pantaleo, I can’t say that this incident didn’t result in some form of change. On June 8, 2020, both houses of the New York state assembly passed the Eric Garner Anti-Chokehold Act, which stipulates that any police officer in the state of New York who injures or kills somebody through the use of “a chokehold or similar restraint” can be charged with a class C felony, punishable by up to 15 years in prison.

It should seem crazy that we have to threaten sworn officers with serious jail time for murdering citizens. In a better world, it is crazy. But, in the one we’ve got, I’m afraid that it’s par for the course.